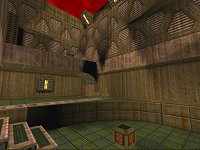 As you can tell by over whelming enthusiasm I've quite frankly had enough of seeing Ikbase style maps. When Iikka originally used the textures and Peej took them on for his early Strafin series maps, they both showed how the texture set should be used. As I've no doubt mentioned before it's a selection of textures that requires detailed and exact architecture to pull off the look.

Whilst this is no plum in the looks department, it ain't exactly going to yank your plank either. Its… well, ok. There is plenty of detail in (like the missing floor panels showing through the muddy ground) but equally there is some overtly big stuff in that that looks out of place and some of the texturing is repeated a little too much.

The ellipse shapes used in architecture in a couple of sections of the map are novel. One particular use for it is the lowed pit containing the MH shown in the first screen shot. This actually makes for some evil playing tactics as you can pummel the stairs out whilst the bots in all their confusion hop about trying to leave. Of course it's not so nice when you get stuck in there, but you can always rjump out.

Speaking of which, there are some nice spots for rjumping. The most obvious one is onto the YA perched up the 1st level, from which you can scoot off a 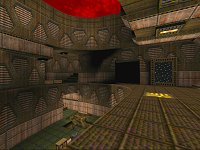 round the map. Item placement on the whole is pretty good. Getting the RA is basically a one way route since it's in an underground passage accessible via a semi-circular tunnel (there is another entrance but this has a tendency to push you back out as this is meant as one of the exits).

From here you can teleport out onto the Quad, which is placed in the upper reaches of the map. This is a bit of an unfair spot to have it because it's a campers paradise because it works like this: Go get RL, then RA and off to the Quad. Its possible to take them out, but its an acute angle to get anything up there.

What lifts the map up is how it plays. 2 is a bit on optimistic side if you want a quick game, even with a human opponent. 4 is smooth and 8 is just messy.