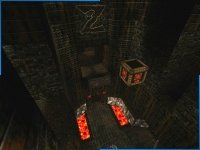 The original was one of the best 1on1 maps for DM Quake, now Vondur has re-made it for bigger games, lets see how it compares.

Vondur had a lot to live up to with this map, Zed was an amazing map and is still played a lot by people the world over. When Vondur re-made this map he decided to add a third floor to his already great three atrium layout. This layout is connected by air lifts and inter-linking corridors so short that the atriums are almost touching. There is a very open feel to the level with large holes allowing you to drop from one floor to another and then come back up again via the air lifts. There are teleporters interspersed at regular intervals around the level, allowing you to move from one place to another quickly. My favourite bit of the level has to be the Mega Health area with the air lift that fires you from the ground floor to the second floor, grabbing the Mega Health on the way. Alternatively, if you are on the first floor there are ramps that allow you to jump across the gap and grab the Mega Health on the way if you jump at the right place. At the bottom of this mini-room is a teleporter and four small areas of lava, ready to catch the unwary. The Ring of Shadows is hidden in this room as well if you know where to look.

The map plays well put I feel that Vondur’s recommendation for 4 - 6 player FFAs is a bit ambitious. I think it worked a lot better as a 3 player FFA or maybe 4 players if you have DeathMatch 3 on, any more and it becomes too much off a blood bath for my tastes. 1on1 is a bit slow with the extra level, much better to find an extra player and go for a FFA. The power-ups are placed suitably out of the way. The Quad has a dangerously exposed clamber round the trim to get to it. The Ring of Shadows is hidden and is only really viable if you have time and the Pentagram is placed so far out of the way that going for it provid 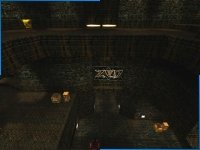 es a nice amount of risk.

The items are nicely set out with the weapons placed on the edges of the drops allowing people to grab a weapon and drop down to the ground floor where a lot of the action takes place. The ammo and health are set back against the walls and in the corridors so you can pick up some ammo on your way from place to place. The armour is well spread out but not in a way that really jumps out at me. The main thing I like is the green armour placed near to the Mega Health rather than the red armour. Of course Vondur is such a good mapper that I am sure he would never have thought of doing such a thing.

The theme of the map is where it really shines, the dark, repressive textures and dramatic lighting really give the map atmosphere and help to add to the feeling that this is a place where people come to die. The sound of wind constantly blowing in the background only helps to add to the atmosphere without being over powering. The occasional crackling of a light really adds the final touch to the map.

Let's all start adding first posts to the OLD reviews as well! What a great idea!

hook and zed are also great maps the only thing that bugs me over this one is the singleplayer element that i cant find and vondur hasnt answered my mail about! But for FFA dm this map is it![and aerowalk, and a couple more...;)]