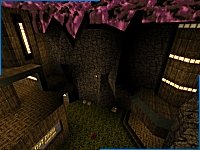 Dranz only recently emerged onto the Quake mapping scene and seems to be trying to make large FFA maps his speciality. Diving Faces continues in this theme and can easily hold as many players as you want.

The layout is, as you would imagine, huge consisting of three main atriums connected by several winding corridors and underwater tunnels as well as several rooms. There is also a very nice outdoor area, which contains a banner for his site. This is something that can be done very badly, but here it looks fairly reasonable as it is set into the wall and actually looks like a banner rather than some random graffiti. The outdoor area features some nice architecture as well as a camper platform that is only accessible by a rocket jump and a platform with a nail gun on that requires some well timed air control to reach. Unfortunately the rest of the map isn’t so well with badly placed pillars that block movement and clutter up the map as well as atriums and rooms featuring very little detail apart from these pillars.

The item placement is possibly one of the worst things about the map. The weapons are placed in strange ways so that the nailgun is hard to reach and the rocket launcher sits out in the open. The one weapon placement that I like is a grenade launcher, which sits on a ledge over looking one of the atriums, perfect for grenade spamming. The placement of the special items deserves special mention, as it is very badly set out. For a start there are two quads very close together. Two quads in a map generally is not a good idea, two quads placed closed together is definitely not. There is also the problem of the ring of shadows and the pentagram. These are placed next to each other and quite near to the quad. If someone manages to get all three then they become ridiculously powerful and literally unstoppable, not a good choice of locati 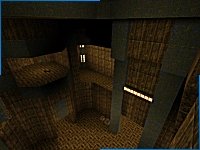 The texturing is a mix of the Zerstorer and iD base textures. Most of the level is textured in a fairly bland brown texture with some bluish grey supports running through them. The outside area also uses some grey rocks and the green grass, both of which go well with the brown and blue textures. The outside area is definitely the best looking area of the map, the rest of it just looks too bland.

The map does play fairly well, except for the fact that you are continually getting stuck on the scenery. You will need at least 6 players to enjoy the map but if you can get that many players together then give it a quick whirl as a warm up map. The outside area shows that the author has talent, he just needs to apply it more and spend more time testing his maps.