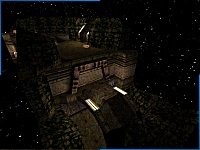 Bal is well known in the mapping community for some great Quake DM maps as well as his work on Nehahra, but he has recently been concentrating on Quake III Arena map. Now he is back to Quake, and what a map to return with.

The layout is based around one large, multi-storeyed atrium. The number of floors that the atrium has depends on how you look at. To me it seems as if there are three and half floors and a basement but you may look at it differently. There are various rooms and corridors running around the outside of the atrium and are linked by staircases that run between the main floors of the atrium. Teleporters and a couple of lifts also connect the floors. The vertical layout promotes death from above gameplay and makes the sight of people leaping downwards through the map a common thing during matches. Some of the smaller rooms around the edge of the main atriums consist of very nicely done outside areas, which feature some very well done rock walls. These walls serve the purpose of sealing the map without simply looking like flat walls that have been covered with a rock texture. However, running into any of the outlying rooms merely forces you to return to the main atrium and back into the fray.

The level uses textures converted from Kingpin as well as a couple from other sources. The textures work well together, combining to give the level the feel of an abandoned industrial area. This feeling is enhanced by the thick metal pipes and chunky metal supports, both of which Bal has used to good effect. The dark textures and moody lighting, couple 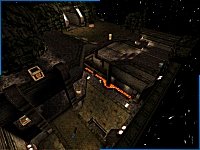 d with the dark sky, give the map a brooding and overbearing mood. This makes for a very atmospheric place to frag and promotes the feeling that your enemies are everywhere. Paranoia is not without cause though, because of the small size of the map and the openness of the main atrium you won’t go long without someone have a shot at you. The only problem with all this openness and detail is that in some places the r_speeds can get very high, this isn’t a problem on newer machines but people trying to play the map on old machines should be warned that there may be some slow down.

The lighting in Dying Embers is very well done, Bal has decided to keep lighting to the minimum, a wise choice, since brighter lighting would ruin the well crafted atmosphere of the map. However, Bal has managed to prevent the map being so dark that seeing your opponents becomes impossible, the darkness is punctuated by patches of light and there is some light cast down from the sky. Enough darkness remains however to make it a very atmospheric level.

A bit dark but still awesome.

I've played this one in Q3 and QW. It rocks in both. Excellent map!

#3. LunaticFringe is afraid of typing too much ^

Just in case you were an incompetent monkey that didnt have 2 cents worth of brain to guess the url.