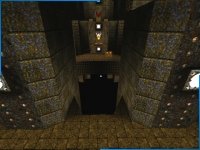 Do you like tense, vertical gameplay? I hope so because ELEK’s new map Coagula has it by the bucket load and he has coupled this with the ever-present danger of the void.

Coagula consists of two rings stacked vertically, with a middle semi-ring separating them. Movement between layers is via two staircases that run round the outside of the map. One between the bottom and middle layers and one leading from the middle layer up to the top layer. There is also an air lift providing a fast route from the middle layer to the top layer. Moving downwards through the layers is a simple matter of stepping off the edge! The one problem is the gates left over from single player. These require someone to hit a button before people are free to move up to the next floor. Once the gates have been opened the level flows very well, but I feel this is a major problem with the map, and one that could have been easily solved.

The items are set out so that the higher you climb, the more powerful the items become. The one exception to this is the lightning gun which, which is found on the bridge of the bottom layer. This gives people spawning on the bottom floor a chance at defending themselves from any death from above. And death from above there will be, because although the best hardware is found up top, the openness of the map means people naturally end up at the bottom. The best tactic for this map seems to be getting to the top floor to get tooled up then jumping down to join in the carnage. 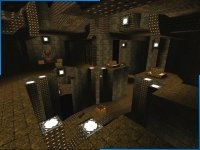 round the map. It makes a nice change to see a different metal support to the usual one. ELEK has done some nice detailing considering the openness of the level meant that he had to keep a constant eye on the r_speeds, he even moved the lights away from the walls in order to get the maximum detail into the map. The metal supports help add a touch of reality into the map, at least, as real as a stone building floating in a void can get. The supports look like they are actually holding the place together.

The lighting on this map is functional, it works, it doesn’t look awful, but it just doesn’t jump out at me, a bit bland really. Overall this is a good map, it just needs the lighting improving and those gates need to be got rid of. The map is a bit too big for 1on1 play but 3 – 6 player FFAs work well, although you will need to turn DeathMatch 3 on for 4 or more players.