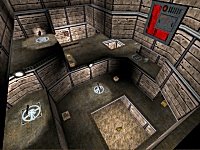 BlackPope is a newly emerged Quake deathmatch mapper and his second map, entitled BlackPope's Testosterone Asylum, was the first of his maps that I have seen. Based around the common or lesser-spotted single atrium style it is done up in some original textures that are vaguely reminiscent of ChesDM2 – Ergonomic Aftermath (They aren’t the same though, I checked).

The level consists of the main atrium, a few side corridors and a basement area. These are connected by a network of lifts, teleporters and one of the coolest ideas I have seen for a while. A self-triggered drop chute, this is simply a hole with a cover over the top. Standing on the cover and hitting the button drops you down, into the basement. This mechanism works well for escaping a pursing enemy as they have to pause and hit the button before following you.

However, despite the original textures and ideas the map lacks somewhat in gameplay terms. The layout is too simple to have a good strategic game and you will bore of all out blast fests after a while. The texturing is also slightly bland desp 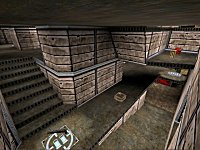 ite being a new texture set. All the walls are done in the same texture, some variation between the levels would have been a nice change. As would some trim around the edges of floors.

The item placement is OK, but some changes would have been nice. The placement of the rocket launcher right at the centre of the map while the super nailgun sits out of the way is slightly strange. I feel their positions would be better if reversed. The powerful items have been better placed. The mega health sits on a shelf that forces you to jump of a fast moving lift halfway up and the red armour is positioned on a ledge between floors.