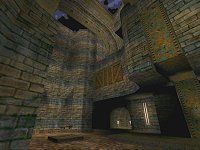 Mixing King Pin wall textures with some of Vondur's Zed textures gives a detailed and gritty look. The architecture is also suitably detailed and builds on from Prod's last xl1dm series map, XL Game Over.

The curved air shoots are out in force this time round which are now the main method for going up the different levels in the map. The bots make a half hearted attempt at getting up, but once a route file from Skorpion is patched in, things get a little better. Its not brilliant mind you, but at least now they can navigate the map!

Three varying sized atriums make up the map. The largest of the three contains an RL place atop of a clogged decorated plate with health packs placed near by. This atrium consists of 3 levels and is where most of the attack tends to end up. R_Speeds are probably going to be high, but I didn't bother to check. The medium sized atrium is only double layered but has a RA tucked in next to one of the many air shoots. The final atrium has 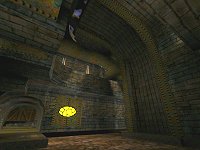 a SNG again sat on a similar style panel sat on the lowest floor that then opens up on the upper levels.

Ammo is more than plentiful and you should not be without some kind of juicy weapon. Item placement is also good, health packs are placed on pads in the short curved connecting corridors so hunting for health isn't really necessary. I'm going to strictly suggest this time around that 1-on-1 isn't worth playing (at least for me, didn't seem to be much going on) and you should head straight into 4 player ffa. 6 is worth trying, but I'd say its more chaotic than anything.