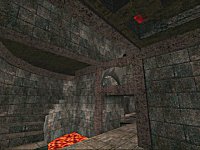 Looks can definitely be deceiving and that's certainly the case here with Trondm2. Whilst visually its rather bland and uninspiring compared to Tron's last Quake map, it is a joy to play. The maps tiny layout is prefer for 1-on-1 close up action. The layout is simple and a quick run round should have it noted down. Some spots appear a little compact but it adds to the medieval style of the m 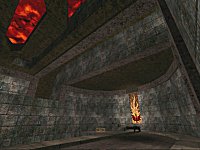 Attempts have been made to spice things up in the looks department what with the pink-ish purple coloured structural supports, but ultimately it's a two tone affair that isn't that nice. That's not to say the architecture isn't nice, far from it. There are curving staircases and girder bar covered openings in the ceilings to stare up at.

Weaponry is plentiful and it's the old LG and RL that seem to carry out the most damage. There is a SNG and a DBS but you'll probably not be using them much. The LG seems to come into its own here when cat and mouse chases ensure.