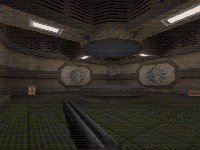 Hmmmm... Curvy. Thats one of the things which stands out from this map. You'll notice that in shots one and three. Corridors curve round instead of suddenly turning at 45 degrees. Its a refreshing and pleasant change and makes a good map to end the pak with =).

With all those curves though you'd think texture alignment could be a problem. Not so. Its spot on. Theres some booming mechanical sounds in there with the usual sound effects. In some spots it was silent but to be honest these silent a 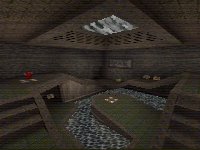 reas were just in corridors so I wouldn't expect any sound.

The detail level is pretty high throughout. Its layout is pretty simple and I had it down quickly. I found it easy to get going on this map and that always helps to make the map more fun. Play flowed pretty well. The problem I had was with ammo. At time I didn't have very much. This changed the game slightly. Instead of blasting away hoping to cause some damage, you have to more precise with where you fire. So taking a more precise approach gave way to a very enjoyable game.

The 4 on 4 load is the one to go with. For a frag fest just try a few more players. The extra back packs lying around makes a difference.