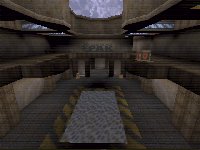 I played a beta of this a map a while ago. At the time the map was much smaller than it is now. I was impressed. My first thought was that it was similar to a Half-Life kind of map. I don't think it would be out of place as DM for Half-Life. It certainly better the majority of the DM maps for Half-Life.

The setting for it, is as the map name suggestions, a secluded warehouse. Built in the middle of a canyon. All exits from here are blocked. The majority of the playing surface is inside the warehouse. Made up of a few double layered rooms.I don't like the spikes on the roof of building in the right hand screenshot below, I preferred them not being there. They do serve a purpose though, it stops you from touching the sky =).

Sound is pretty good. Theres the buzzing electric noise mixed in with the rushing wind. Lighting was good. I found it a little odd the top of building in the second shot was a little too dark. I can't see any reason why it would be dark. Whilst on things that bugged me, I was a little annoyed about having to jump up some boxes to get to the upper level. The fourth shot shows an example of this.

Most of the fragging took place in the two areas shown in the second and fourth screenshots. Funny really since they are both connected together by a short corridor. The rest of map seemed a little quiet. I put that down to the bots being thick though, it could also be though t 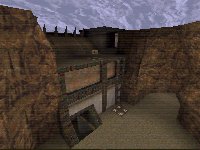 hat the majority of main items are in these two sections. I know from the beta which bits were added and feel that they were added just to enlarge the map.

The Quad came into play quite a bit. You can spot it on the far side of room show in the third shot. Its placing meant a Quad endowed player could rain rockets and grenades down on the fighting masses and rack up a rather big score. The pentagram was hardly used. Its encased behind some metal bars in the water area shown in first screenie. I little bit of thinking will let you grab it. Unfortunately I couldn't work it out, so Pingu told me.

Even though the map is a little unbalanced, I had a real blast playing it. If your team kept control of the quad then you'd be laughing, other wises you'd probably be getting your arse kicked.