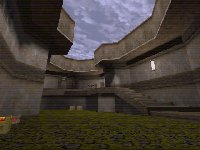 This map has alot of character. From the graffiti painted on the walls (second shot) to pictures of the authors previous work (fourth shot) and a broken wall with individual bricks stacked on the floor. I found the map pictures very funny since they are adverts describing his maps as ideal holiday resorts!

The theme here is the usual UKPAK fair but also has a medieval type basement underneath. The 2 themes connect together well. Again sound effects are appropriate. In the cellar area yo 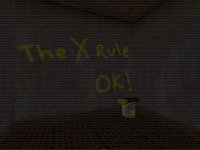 Lighting is tad dark in some areas (see third shot). Some angled lights in the floor in the area shown could have lighten things up. Theres also another odd little thing. The previously mentioned picture gallery has a floor and roof texture which are not used anywhere else in the map. I just find that a little weird! Thats just me being extremely picky though =P.

I found this map to be extremely easy to play. The layout isn't complicated and I worked it out pretty quickly. This is definitely a 4 on 4 map. It seems to play perfectly with that amount. Although it wasn't as fast a game as on UKPAK5, I'd never be far from a fight.