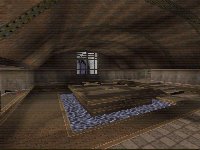 On to the fourth map now, and its creator is the organiser of the UKPAK. Does it keep up the high standard set by the others? Of course it does. Aardappel has, like the other authors, he has taken the old industrial set of textures and inject his own mapping style.

At first I thought there was little too much water. Maybe there is, but I still had great laugh playing this map. The layout is very open and wide. Something which is not shown in the screenies are the long corridors which have upper platforms on either site. I loved running down this. It gave you a height advantage over anyone in the middle section. It was also entertaining if a player was on the platform opposite you. You'd be strafing left and right dodging their oncoming arsenal, whilst trying to put a big dent in them.

I think the 4 on 4 player load works the best here. 6 on 6 makes it a little more interesting.

Theres a couple of wooden bridges, one of which can be seen in the third screenshot. I love running up on these then just as you reach the top, jumping. I'd fly high up into the air, enough infact so I could spin round in mid-air and rip a couple of 'nades or rockets at a following opponent. However I did happen to frag a couple of teammates when I did it one time. Doh! 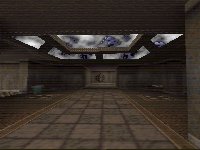 ly I found some things that bug me =). First off the opening to the underground water areas. In some places they are were in the middle of corridors. If you were fighting you could easily fall in. That said, the majority of the waterholes were very well placed. They were in the garden bits, as Aard calls them, or off to the side of corridors. The garden areas are pretty cool. They help to break up the style of map.

Again I have a little niggle with some of the architecture. There some really cool curved metal roofs which are used (Pingu has them in his map as well). Then theres those very thin, weak looking metal supports. I personally would really have liked the roofs to all be curved. I just think that style looks better.