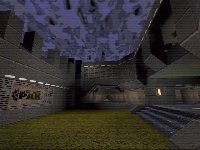 This map is probably the most different looking of all the maps. It is also the least detailed map. The design is simple yet effective. Your battle ground is set in a high-tech style castle. It looks like the author has used a different set of textures from everyone else. Theres a lot of grey grating and panelling which I think looks pretty cool. The architecture looks very clear and clinical. Theres alot of angled walls and supports, which again set it apart from the rest.

Sound is ok. What annoyed me though is that you can heard the rushing wind sound from particularly anywhere in the map. Oh well. All the lighting seemed to sourced. The only dark areas I spotted are in the area shown in the first screenie. Also theres a teleporter which a has a flashing light in it, I think it looks daft. Well flashing lights in general do. If there was some kind of broken ligh 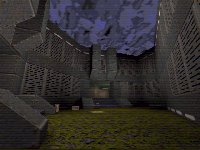 t there then it would have been cool, but it blinks for no other reason than because it can.

Theres one more thing that bugged. Theres lift which just seems to float up and down. Theres nothing connecting it. Just seems wierd!

Its one of the smaller maps in the pack. The layout is simple and you'll have got it worked out fairly quickly. It plays prefectly well with 4 on 4. Actually it was a riot. A lot of action took place in the area in the first screenshot. Rockets, grenades and bolts of lightning would be flying.