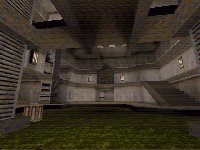 Well this will probably be the first map you'll boot up once you have the pack. First impressions? Just from wandering round you can see the high standard that has been set. Highly detailed. Using mostly old industrial Quake 2 textures with the UKPAK textures. Theres a couple of outside sections, but the majority of the map is set indoors. R_Speeds are good considering how detailed some areas are. You can see from 3 of the shots how detailed it is.

What you can't see from the pictures I've selected is that in certain areas of the map the texture scheme is completely different. Admittedly it works well and merges in with the rest but to me it just seems to be a little odd.

Lighting is good. A few dark spots but nothing major. Most of them are in the water and if you daft enough to hide in the water then you deserve to be shot. Inside, lighting is all sourced, whereas outside you get a sort of darkish moody look. Which matches the grey sky. Something else to note is the use of sound. Its not something I usually mention, probably because I don't have speakers plugged in =). Anyway it seems a little quiet in some areas. The water areas had a swamp type of sound and outside areas had the usual wind one. In the corridors though it was peaceful, but you'll disrupt the peace soon though with the sound of clattering grenades and rockets pounding into walls.

Looking at the name you'd think there'd be alot of camping spots. Theres the odd one or two but since this is a teamplay map they shouldn't come into play. A prime example is the little alcove n 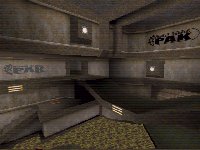 ear the Quad. You can see it on the left of the third screenshot.

Now down to business. It may look good but does that mean it'll play well? I'm not sure. Weapon placement is a bit iffy. Sometimes I could easily walk for quite a distance and not find a weapon. I'd be there with the good old boomstick taking on someone with an LG or RL. Guess who'd win? Ammo wasn't too much of a problem I'd have plenty of shells to keep on firing. There seems to be very few weapons in this map. Items in general were a little light on the ground. I think there are 3 pieces of armour in the entire map. This did have an affect on the game, it meant people were easier to take out. Not something I'm that keen on.

4 on 4 was a rather dull affair. It was ok when things got going but it was became more of slow, hunt the player down type of game. 5 on 5 though was a little more lively.