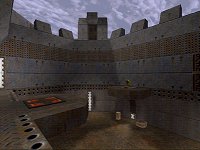 Introduction: Phdm1 is the first map from a mysterious new mapper known only as "Paul Healey". Apparently he knows something about map quality, as he has produced a fine and stylish first release, and I, for one, will certainly be looking forward to his future maps.

Architecture and style: Dressed in Stecki's famous textures and using castellated designs, this is a pretty cool looking map. The theme is an open futuristic base, with clean steely blue wall textures mixed with pocketed rusty metal beams, and a simple sandy floor. One room is the exception to this theme, the upper room with darker, rusty textures - this still fits into the map's style by using similar details. Architecturally, the map uses subtle angles and very shallow supports on the walls, combined with an impressive castellated skyline to give the map visual interest. This gives some fairly impressive architecture, while keeping major designs out of the players way, though a few areas of the map are lacking in appealing designs, and perhaps a bit more eye candy near ground level would be better. There are some good details, with wall lights and grilles, runic corner details, floor numbers on some corners and an industrial striped inset on the top floor. Lighting is fine, with both light from the sky and some sourced light from spotlights. Build quality is good, I couldn't see any obvious problems. Altogther a fresh and good looking map.

Layout and items: The map consists of 4/5 main areas, roughly arranged in a square: A large main 2 storey atrium, which doesn't contain any important items, but provides a hub for the rest of the map; a smaller 2 storey atrium containing the RA and GL on the upper floor, a RL on the lower level and a hidden ROS; another small two storey atrium containing the SNG and the YA on the upper floor; the final area consists of two single floor rooms, one above the other - the upper room contains another RL and the YA, the lower room contains the MH and a DBS. Ammo and health are liberally and evenly scattered through the map, while the LG is conspicuous by it's abscence. Connectivity between these areas is mostly good, each area has 2-4 entrances/exits. Vertical connectivity uses some stairs, but also the most important feature of the map: wind vents! These are placed in the middle of the main and RA atria, and provide a quick way to get to the next floor, as well as much amusement and tactical potential. In some areas it can seem time-comsuming to get to the next floor, though there are some tricks that help (see demo). The only real layout problem is the YA room - this has an important second storey, but no way to reach it in that room without a rocket jump, which makes this area feel linear and less useful. Paul had a wind vent in this room when the map was in beta, and playing the final version, it's clear removing it was a mistake.

Gameplay: Gameplay turns out to be, well, vaguely interesting =) 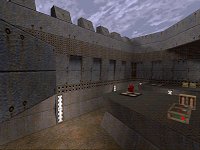 . I tested this map with a variety of Obots, ranging from 1on1 with tougher bots, to 6 bot FFA with easier ones. The bots had no problem with any area of the map, though they did tend to stay floating in the wind current. However, this proved to be quite an effective tactic with the harder bots! In general, the gameplay is normal rocket orientated Q1 DM gameplay, that is livened up by the fun and games the wind vents provide. Not only do they give the player a quick way of gaining valuable height and DFA potential, they also test your rocket aim well when trying to hit a floating player, and have the potential for some exceptionally cool mid air kills. Thus they spice up the gameplay a lot. In 1on1, the map can be a little slow, and camping the RA/GL/RL area proves to be most the effective, if not the most interesting, tactic. This area does make the map seemed a little imbalanced, and perhaps some swapping of items would have improved this. In FFA, the map works well with 3 bots, while it provides much hilarity with 6 bots, where it's easy to rack up high frag counts - again the RA area is useful to hang around. With human players, I'd imagine the map would be much the same - quite tactical in 1on1 and more fun in a small FFA. Aside from the imbalance, the lack of the LG can be seen as a flaw, it could come in very handy for the wind vent fighting, but alas it's rockets only really.

Overall: I definitely recommend this: while it could do with some more structures, another vent and some item tweaking, it's a solid map in an original style, to which the vents add an extra dimension.