Thank you to Escher for contributing. Here is his interview...

Well i made just 5 maps for quake so it's easy for me to pick up the best 3 of them :) I would say UltraViolence, Messy Base and De Bello Quakero (in this order) 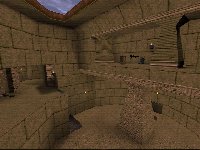 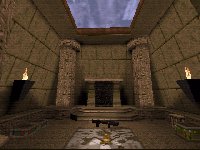 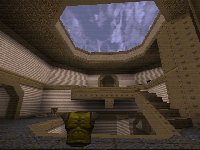 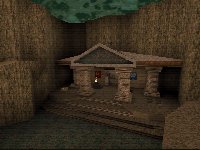 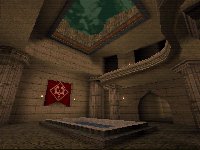 UltraViolence is by far the most known level of mine and i think it reflects my philosophy on the DM play.....fast action, many frags and lots of gibs. That's what i've been missing since q2 came out (tough i must say that Q2-CTF is the funniest team play mod ever).

Messy Base is a way more strategical map compared to Ultrav tough it's still fast enough for giving you a big adrenaline rush.

I didn't really start De Bello Quakero as a DM map; at first that was meant to be a sort of "walk on and look in awe level" made just for myself. The ability to build a world gives you a sense of omnipotence, like you were a sort of God, that's why i love editing maps....just for satisfying my ego i guess. I believe that mappers don't create stuffs for being noticed and getting some popularity, that's just a mere consequence of the great effort you put in what you did, not the goal. Anyway as soon as i realized that my poor system couldn't handle big maps i lowered down the level of details and turned De Bello into a FFA map.....yeah, i was lucky because it turned out a pretty nice job at the end.

Well, my first one i guess: "The Blue Death"....too kitch :) At the time i made it i was still playing some Doom2 DM so i was still used to pile frags with each and every weapon available and i didn't like at first the fact that id came up with an unbalanced set of weapons......i hated the RL! Did i really write that? :) The Blue Death was an effective attempt to balance the game again (big rooms, just a few rocket's ammo, etc etc) I think i felt exactly as many ppl do these days, orphaned of their game. BTW, aside from some minor gripes i think Q3test is an helluva of fun.

BSP.......that was a tricky editor but it featured many great tools a long time before the other competitors.... moreover it was a freeware.

For about a year. I did maps till q2 came out......'nuff said :) (Anyway i've still got a couple of aborted Q2-CTF maps somewhere on my HD....i never found the time for completing them)

Read my answer to the second question above.

Waiting for Q3 comes out

Quake is still the funniest one, i got bored of Q2 just after 5 months of intense play then i switched back to Quake for feeling the heartbeat again. Anyway, i can't really say that q2 is a bad game, that would be far from the truth...i just would have liked to see some more speed in it. (and better maps as well). Q2 one-o-one matches are plain boring, aren't they?