Thank you Rentinal for contributing.

Please note that since this interview Retinal has released Grotesque - broken3 (226Kb), so his favourite levels may be different now. Anyway heres his interview...

All three are Quake 2 levels because I never really made an impact with my Q1 rtldmx series. 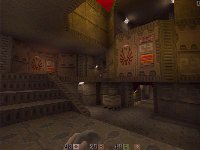 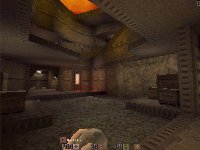 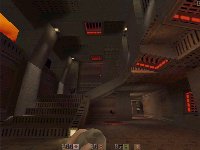 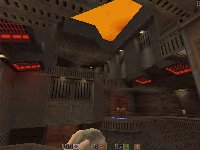 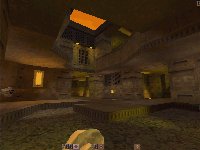 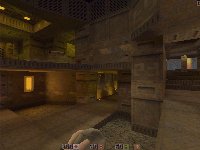 I chose these levels for several reasons: I am very happy with the designs of the three of them, (especially the design of Third Degree, and the open ness of Heavy Metal). I also think they look pretty good (especially since all my other levels are for Q1) and because they play pretty good.

There's a nice question. =)  I'd have to say my worst level is "The Gauntlet" - rtldm1 (Q1) , because it was my first released level and is very boxy. It doesn't play that well at all, has extremely high speeds, and overall has the feel of a new guy with an editor. (Despite the fact that I had three unreleased maps before that, the one immedately preceding that was called "Gib Keep" and was probably actually better than "The Gauntlet" - Oh Well).

I use and have always used Worldcraft (insert latest version number here). I found it to be the most easy to use, and have the best user interface. I tried Stoneless a long, long time back but while it was very good, I just didn't like it over all.

Hmmm, that's a tough one. I'd have to say, pay attention to look and feel (After all, what else is there?). First and foremost, how a map feels or plays is the most important thing because if its not fun to play, what good is it? Make maps that run fast (harder than it sounds), have an interesting and connected layout and provide a generally good game for deathmatchers of all skill levels. Another important thing is the look of a level. Always take the time to make the lighting in a level realistic, intelligent and not too sharp. (Fullbright or pitch black areas).

I have been making maps for just over a year now, I started at the beginning of last summer, produced three maps over the summer, then released my first one in early October. I started making Quake2 maps soon after the game came out. My first one was released at the end of February.

In all honesty, I just enjoy creating the structures because I have an interest in architecture. I like the ability to control all the aspects of the map from light levels to the sounds you hear. As an added bonus I can deathmatch in them, though admittedly I'm not very good at it.

This has been and will more than likely remain just a hobby. When I started making these maps I really had no intention of joining a company or trying to be noticed by one. It's just something that I like to do for myself, and sharing them with others was just an added bonus.

This is becoming an age old comparison. =) I'd have to say that I now prefer Quake to Quake2 only because Quake gives a far better playing experience. Quake2 deathmatches just can't compare to the intensity and action that you experience in a Quake deathmatch.

Another huge factor is the speed of play, in which Quake wins hands down. With this said, Quake2 does look a lot better.