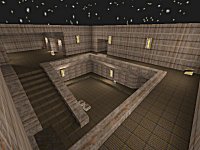 If aesthetics are what you value most in a map, you might be better off avoiding this. The architecture and design seem to favour those with weak systems, primarily due to their overall lack in detail. Most rooms are squarish, with flat walls and bland lighting, and no real interesting designs to balance things. More large-scale detail could have easily been added when taking the spacious nature of the map, and by all means smaller features such as sourced lighting wouldn't have gone amiss. Texturing is also fairly shoddy in some places, including the ceilings and stair trims.

The map perks up a bit in the gameplay department, however. The outdoor area between the GL and LG makes for some particularly entertaining aerial combats, with explosives from the top level meeting with lightning shafts from below, providing much amusement for onlookers. The large indoor rooms are also well suited to rocketeers, with long-range fighting not uncommon. In fact, it's 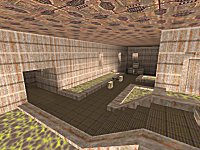 a little *too* common; very little usage is given to the lower-end, close-range weapons throughout the (spacious) majority of the map, and they only really get their say when the quad comes into action. It could have done with some more compact areas to balance the weapon usage a bit more. Saying that, the one tight-spot (by the quad) is a little *too* cramped, giving an inconvenient exit for quad-grabbers.

As for playerload, 3 player FFA seemed to hit the spot, although 1on1 and 4-FFA are both playable. Most of the time it's pretty much Rocket vs. Lightning, though.

pretty much 100% of the digs in this review I brought up when I beta'd it for you.

Remember that next time :) hehe

I personally disagree with the score for this map, it should have been a 2/5 at the most...

/me slaps xen around a bit with a wet llama