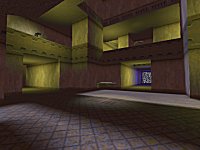 Finally I found the time to do another review. This time it's going to be "remix of yellow" snow by KrimZon. The style of this map is somewhat, uhm, well, concrete/industrial, using the retail Quake2 concrete textures. On the other hand it's not really industrial because both the texturing and the brushwork are rather plain, nothing spectacular. The texturing is nearly only that one grey concrete texture you can see in the screenshots all over plus two types of grey trims used to seperate the floors, grey floor and blue sky. Architecture fits the grayish textures, it's blocky and, well, it's boring.

Some coloured lighting has been used to brighten things up a little but the contrast doesn't seem quite right. The teleporters emit a very strong blue which doesn't fit in very well with the theme. The abundance of yellow light makes the textures not seem as bland, but it very flat so doesn't have a huge affect.

The map was built for 1-on-1 play but the item placement and load is totally wrong for this imo. There's one RL, DBS, NG and SNG each of which a 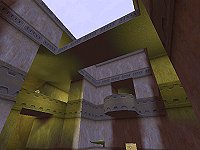 re placed that badly that you can grab all of them in one run of 10 seconds (I counted the time ;)). That's all there is to say about the armour and ammo...

Onto the last part of this review, playability. Is this finally the category where the map overcomes of it's plainness? Unfortunately not. 1-on-1 is rather boring since as you can grab all weapons in no time, as previously mentioned, and it doesn't take much longer to get all the armour (GA and YA) either. One thing that doesn't help, is the almost complete lack of ammo. You will find only 2 packs of nails and 2 packs of shells, no rockets at all. I tried 4 player FFA as well but gave up after a short while.

All in all I wasn't impressed in any way with this map. Sorry, but I just can't advise you to download it...

...one of the worst map names I've ever seen :P

Looks like a speedmap. Not bad for a speedmap, if it is.

But it seems like this is no speedmap, at least i couldn't find any hints on that in the readme or whereever...

I think the screenshots give it way too much justice

i think i'll stick to teamfortress maps. i guess i just dont play enough dm. btw, i did build it rather quickly, starting with the floor. I was worried that the original was too open, so i tried making a smaller map.

#6. ToadWarrior couldn't be arsed with a title ^