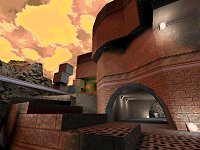 This map uses custom engine features available with such engines as TomazQuake or DarkPlaces; these being coloured lighting and a skybox. The coloured light is a bit too rich and varied, but can be avoided if you wish but not extracting the .lit file along with the BSP. Or by just using a standard engine =). The skybox comes in the form of six .tga images, and should be extracted to quake/id1/gfx/env. Turn the skybox option on after loading and you have a fresh new background to add to the visuals and atmosphere this map already has to offer. A fairly new industrial themed set is used, and the architecture style reflects it well, with various towers, crate-stacks, pipes and other machinery contributing to a cool and original looking map.

Unfortunately the map is let down alot on gameplay; mainly due to a problem touched upon in some of Misyu's previous DM maps, being the overuse of clip brushes. Clip brushes are invisible brushes often placed over detail in order to avoid the player from getting stuck, but here it is taken to the extreme, totally blocking off all the crates, large industrial details, rocks and in one case a toall 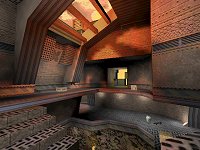 y visible ledge... it totally ruins the immersion factor and offers an adverse effect to what clip is normally used for, as it restricts player movement and hinders their ability through deception.

Other annoying features in the level include the teleporters, which although good looking, are not that obvious to the eye when running around and shooting, so it can be easy to accidentally slip into one whilst playing. Also, there is a ladder out of the rocky basement which leads you smack into a wall in a small alcove, with your back to the main atrium - not good.

Overall the map is worth getting for it's looks alone (which would suit SP very well), but gameplay is too flawed to be worthwhile...

I gotta say I like the design and architecture of this map, but as xen said the gameplay is deeply flawed. Another thing, Am I the only one who doesn't like the Bulowad texture set? To me they just look like paintbrush pictures, no real depth or organics to them. And yes, the clip brushes in this map were one hell of a pain in the ass. I'm like trying hundreds of times to jump onto those crates and that weird box thingy.

What immersion has to do with gameplay ? It plays good (not great, but really good).
Clipping may be overdone, but once you`ve noticed it, you lern where you can and cant get, so it doesnt affect gameplay that much.
Good map, only texturing is a bit plain.

If you compare to other maps on this site it should get ~3.5 score (maps scored 2.5 here are mostly mediocre ones)

sargatanas: I'm in agreement there. I don't like the texturing, but my main grumble is the use of coloured lighting. It's awful. I much prefer the original map that this is based on (misdm5 - Underground Base).

Sam : This is a fairly mediocre map, hence its score.

Just felt like reminding you that GQ has the ability to ignore .lit files if you want :) http://www.planetquake.com/gzone/gq. :P

Wasn't I the one who asked for that to be put in? :D

I kinda like the bulowwad textures, hence why me and killaz used them in "fall of the acrid core"

you can turn off colored light in MHquake too! And you do need that for this map

Why weren't you here when the trolls needed flaming? :(