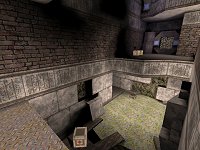 Number 13, unlucky for some, but not for MisYu. Nothing out of the ordinary here, it’s all trademark stuff. A fresh different texture set. A compact level design that is heavily interconnected. Plenty of nice touches and details such as the stacked oil barrels, the cracked and broken walls and the wooden planks across the open ground on the lower most floor.

The map is the equivalent of twitch gaming. It’s fast and furious. Play was in spurts, where by you’d be all over your opponent and then quickly get fragged and be taking a pummelling whilst you tried to get yourself back into the game. After 20 minutes of play the scores were spookily even and not as high as I would have expected given all the effort I had to put in.

MisYu’s venture with colour lighting is interesting to say the least. It’s subtle for the most part, with light blues glowing from the tele 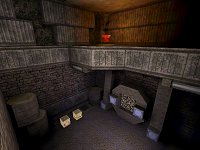 porter frames. I did say for the most part though because there is a shocking red/orange light being emitted from the RA and another item pad. I’m not quite sure of the logic of this either given its just in those two spots.

Thing is, there is nothing outstanding here. It just does everything well. If I were being overly critical, I’d say that it is just 3 very rectangular looking atriums connected together in a straight line. It’s something you’ll play a few times, since it does play well, but forget about after a while.

I love falling down that bit with the MH and gibbing.

#3. Electro is afraid of typing too much ^