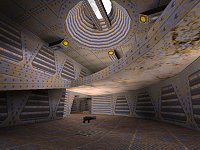 Take some base textures. Turn them blue. Add some rust. Mix it with some quirky architecture and you should be onto a winner, right? Not quite.

First impressions are good. There are so many nice ideas; such the iris opening that uncovers one of the RL’s, the use of curves, and obviously the new textures. But for each of these moments of genius there is a lack of attention in other areas. There are quite a few misaligned textures. It isn’t the easiest map in the world to navigate. Partially related to this is bad item placement, given that its hard to get to stuff, it is hard to pick up items. The bots do try to get various items such as the MH and YA but since they’re as thick as pig shit when it comes to jumping and climbing, they just ignore them.

I found it odd that the RA and another RL where kept out in a partially secret/hard to get to area. You have to go up to the YA and MH, then walk to the far end of the room where a secret double door opens (no pointers to this, it just opens) to reveal a teleporter. Going through here 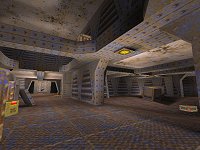 drops you in a circular room with two floors. The upper floor is a thin (read, very thin) walkway around the room that has the two aforementioned items on.

It’s like the map has been compressed in both width and height. That’s not to say it isn’t enjoyable to play. It certainly is, but it takes some work on your part in order to tool up and get going.

I would say that I’d hope to see the textures put to better use, but that already appears to be the case with Vladin’s latest map, Spiteos. Morbid Descending is worth a look at just to check out the various ideas, but it doesn’t deliver in other areas.

Well if you want me to say something about this - quite qool man, keep it going. I'm curious about next works of the Vladin. Anyone knows some other maps of him?