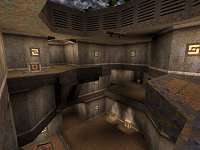 Another well used theme makes up Tymo’s second Quake map. Progress has been made in all areas from his previous map. This time it’s aimed at 1-on-1 and as such it’s very compact. The layout consists of a tall 3-floored atrium. Surrounding it are some very tight corridors. The most striking thing to me how well the sharp lines of the architecture show up. The thing that helps here though is moody lighting.

Continuing the layout, there is a small basement area with an L shaped teleporter that goes up against the floor and wall. Fu 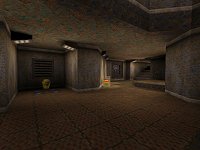 nny thing is this is the first of two features that I can’t remember where I’ve seen before (anyone who does know, please post). The second is the slightly raised ramp on the topmost floor, which enables you to leap up, grab the RL and let rip with a couple of rockets down below.

There is an abundance of items. The MH is twinned with the RL on the top floor. The YA is near one of the maps two SNG on the 1st floor. You’ll need a similar level of opponent against you to stop it from becoming one sided. It is very easy to keep hold of the YA, MH and RL, and with that you can easily control the level.

Final verdict is that whilst it is polished and plays well, it is, unfortunately, nothing I haven’t seen before.

Both appear in the Reincarnation map pack/modification:

-The slopy ramp is from Reinc2: "Nubian Chicken Sexer" by Gonzo.

Really I should have known that :).

/me slaps Paul around a bit with his maps directory

paul summed it up well i think:
whilst it is polished and plays well, it is, unfortunately, nothing I haven’t seen before.
It's a good map, plays nice, looks quite good, but not neccessarily revolutionary. Well done to Tymo :)

I think also q1_q3dm17 has this kind of ramp

Probably. I'm not sure I've played that one though :)

yes this was long time before q1_q3dm17, but the best on this level is the amazing cage you to enter and stay before you get the quad. Yeah reinc2 is a really quad whore massacre *g*