This reminds me of Ninja’s Asylum (nindm2) with the red brick textures and the usual inset wall bars and computers banks. Runes have also been used but they don’t really fit in with the theme. Texturing and style wise it isn’t heavily dapak inspired as nindm2 is, but there are similarities.

Visually it’s more solid than spectacular. There are some interesting looking sections such as the area around the RA. The same goes for the lighting; it is more functional than amazing 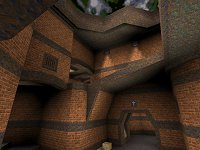 with a few spots where lighting is source less.

The scale is larger than expected but more in width than in height. The corridors are an obvious example of this. The map flows between 3 hubs that connect together in a triangle pattern. Liberal use of stairs, teleporters and lifts makes for good movement. 1-on-1 doesn’t work due to the maps size and is better suited to larger games.

First glance would indicate that there might not be enough ammo and I’d say there is just about enough. Item placement isn’t bad. There are few wall hugging items, but they’re mostly placed in the middle of corridors and in easy to reach spots.

It’s competent in all areas but nothing really stands out from this map. One word sums it up nicely: average.

Nice map... i like the layout but its kinda plane. I'd love to see frogbot waypoints for it.

This map reminds me of this other map

You remind me of a very l337 golfer

You remind me of a not so l337 golfer lying on the floor of a totally sweet room; then (and without any warning) suddenly rearing up into the night sky (ceiling), diving for the sink and blowing your dinner and 9 assorted drinks in it.

yeah sorry 'bout that. I nearly did it again in the morning when I had to clear it up too... :)