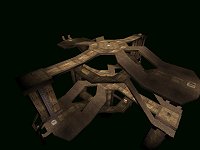 It’s a floater! Strictly speaking I don’t regard them as maps, but I shall try biting my tongue and giving it a fair go.

This is a different take on the style, with it being constructed out of wooden platforms with metal trims. 4 octagonal shaped floors are connected by very steeply angled walkways. Outer ledges are hooked up via these walkways and most contain items in one form or another. A couple of floors are whole whilst the others are the opposite with holes in the middle.

really the case. As mentioned earlier the connecting walkways are far too steep and like the horizontal floors aren’t very wide which makes ascending them difficult in the middle of a game. All in all this makes it rather hard to play. I found I spent half of my time falling off the map into the void.

Play is pretty random too. In 1-on-1 it was cat and mouse with lots of chasing. After a while this becomes tedious due to the lack of space and annoying construction. Even though its not suited to FFA, I tried it anyway and found it consisted of people hopping about from level to level just aiming at whatever was nearest, mostly fluking frags. Ultimately it either becomes repetitive or infuriating depending on how long you managed to stay on the map.

looks very nice.
and very unplayable (he didnt even connect bottom to the top with some teleporter/windtunnel for getting up fast) with unbalanced items afair

Floaters have no place in Quake1 because Quake1 is not a lamer game.

I dont think it's very playable... more of a "test" map for the author maybe?

Yeah, the architecture is cool, but the playability is cold.