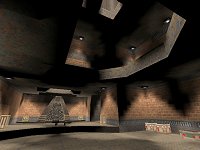 This map reminds me of Headshot's releases. The whole style, architecture, a few aspects of the layout, and even the teleport structure all seem reminiscent of DaPak and various other maps from Quake's golden era. Unfortunately this one isn't as good. It's first main problem comes from being quite small and cramped, with few open areas nor large rooms. There are two areas with more than one floor, but on the whole the layout seems fairly flat, restricted and poorly connected, with 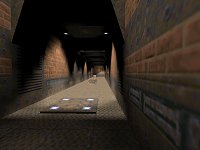 long and tight corridors being the primary way of navigating about the map.

Two RLs are present but are seldom put to good use due to the map's cramped nature. One of them, however, is placed a mere stone's thow away from the RA, Quad, and (through the teleport) the LG, making balance rather unfair in dual play. Resorting to 3+ FFA would normally resolve this but here it just turns the game into a rocket-spamming gibfest.

It's a decent enough attempt for the guy who brought us 'Old Crater', but the whole thing just needs enlarging and retexturing (in a theme that hasn't been extensively overused during the past few years). As it is, it's nothing special.

Another map bashing crap.. This guy is just mean or what ?

Even if its dapak-styled map, and I agree layout could`v been better, its fairly good and looks stylish. And I played it 1-1 - its fun and quite strategic.
Deserves better score.

...the difference between 'map bashing crap' and being critical. Go read Grindy's review of 'Perpetual Energy' if you want the former.

Paraboil has done much better than this in terms of gameplay, and the theme looks old and rehashed - far from 'stylish'. Or I could just not fecking bother at all; would that suit you more?

...as I pointed out in the news this is a modified version of The Ravage which is over a year older, so it is hardly a new creation. Just for reference the original got 2.5.