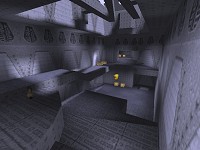 Cluttered and cramped is the unfortunate first impression you get. Oh and its very, very blue. Every texture is shaded blue, which does make items really stand out. Unfortunately the scale of the map is all to pot, some areas almost get it right where as others are infuriatingly small. You end up bashing walls and get the feeling the ceiling is right on top of you.

However, Raptore shows promise with the inclusion of a couple of nice touches such as the bobbing crates in the maps only 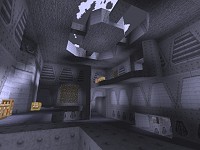 water section and the underwater tunnel, with shimmering windows. Whilst these effects help raise the level a little, it doesn’t do enough. There are odd things that don’t make any sense, like why the first time you walk over a player spawn it says “-1” and the mysterious floating YA. Elements like this make the level feel more like a test map than anything else.

And I hate to say it but it doesn’t get any better whilst playing. There is more than enough supply of weapons, ammo, health, etc, but movement is so cumbersome that it’s depressing. If the scale were expanded and a little more care taken with texture alignment then it could have been more that just a novelty.

I know what you mean by that block that juts out, dunno why I didn't mention it specifically because I did hit it quite a few times :).

Great, now you make me feel guilty for giving you such a hard time. I'm going to go look for the block now, and when I find it I will hit my head on it a couple of times for good measure. My next map will have *much* better clearance, I promise. I've come a long way since june. >=)

I look forward to what you've got in the works.

You`v shown this map beta to some ppl, including me (when it was stock id-base textured) and you`ve been told its cramped.
Shame you didnt listen at all!
I like the set looks and some ideas but the map is crewed by the scale/clipping ;(