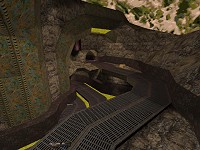 Change of setting for Gilts latest. The best description of its style would be SPoG style due the excessive, almost illegal, use of curves. The layout is made up of a set of circular corridors that spiral upwards via an indoor hub and an open topped rocky area with a base of flowing slime. The upper level connects down to the lower most floor by a straight lift shaft.

Visually it’s excellent with the mix of industrial style textures and grubby rock. In the play stakes it doesn’t hold up quite as well. Even though the layout does spiral outwards meaning it flows quite 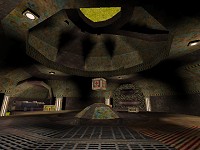 nicely, most sections are just two levels making it rather flat. As such I found it a bit monotonous after a while since I’d just jump back and forth between the teleporter next to the MH and its exit near the RL and RA. It does however seem better suited for duelling than for FFA. The map is relatively small and when playing indoors with larger numbers it becomes a little hectic.

In 1-on-1 there is a good amount room to manoeuvre in. The two-floored cylindrical hub makes for plenty of jostling as you strafe about against its outer walls. The teleporters mixed with at least 3 exit points from each area means that connectivity isn’t a problem. Item placement is similarly good with each piece of armour being twinned with a decent calibre weapon.

SP in it was rather good too.