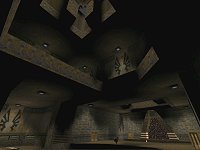 Headshot inspired map from Parboil. The main wall texture is definitely over used and really looks too busy when repeated as much as it is. The layout is pretty small and compact, or maybe that should be cramped and tight. The scale seems somehow wrong and could definitely do with enlarging.

Weaponry is very heavy, and could have done without the RL's. It woul 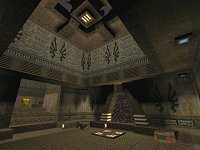 d have worked perfectly well with LG's and GL's. In 1-on-1 kills came in quick spurts, with the lead occasionally swapping. The GL when used in FFA was plain vicious (especially when Quaded).

And that brings me to my main niggle with the map, which is the Quad. Its placing is very obvious (underneath a stair case) and easy to get to and certainly made the game more random than it would have been. I would dread hearing someone pick it up because I would know that very shortly I'd be a pile of gibs, almost regardless of where I was in the map.

#1. Anyone mention that the pictures are fooked... ^

I suppose that mimicry is the highest form of flattery?

Almost a year+'s worth of maps were direct rips of what Headshot and Danimal did in DaPak. Headshot must be used to have his styles ripped by now. =