Pleasures Of The Flesh 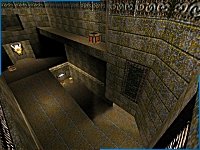 Daz is one of the newer Quake mappers that have been emerging recently. This is his newest of a growing number of released maps for both Quake DM and single player.

The map consists of one very large main room with smaller rooms just off of the main atrium. The main room consists of four and a half floors, the half is a lowered section on the bottom floor which contains the quad damage. The smaller rooms and corridors lead away from the main atrium and then back in again at a different level. There is a two-way teleporter going between the middle and top floors with the rest of the floor connected by stairs, walkways and lifts. I have a couple of small and purely cosmetic complaints about the lifts, firstly they aren’t sunk into the floor in their start positions, you have to step up onto them. The second problem is that they go up to far so that they end up sitting above the floor at the top of their run. Neither of these problems affect gameplay, it’s just that it looks slightly strange. The only other real problem is that the stairs next to the yellow armour are a little bit too narrow and can sometimes be difficult to get up in the heat of battle.

The weapons and ammo in the map are generally well placed, except for the fact I would have liked to have seen another rocket launcher, maybe near the green armour. All of the weapons are present, even the often missed nailgun. This means that whatever your style, you’ll find a weapon to fit. Health is plentiful with two mega healths as well as plenty of normal health packs. Armour is a bit short on the ground, there is only one of each type and the red armour is in a difficult to reach spot. Maybe another green or yellow armour would have helped matters a bit. The important items are placed slightly strangely, the quad is in the open at the bottom of the level while the red armour is on a ledge that is too easy to jump clean over. As for the mega healths, one is nicely positioned on a ledge that you have to jump to from a window. The other mega health is positioned beneath the rocket launcher in a pool of blood. I think putting the red armour in the pool of blood, the quad on the red armour ledge and the mega health in the current quad spot would have made for a more balanced game. As it is the positioning makes for very fast and bloody games, which can be fun, it just depends what mood you are in.

The level is textured in a grey brick motif that uses various gothic and tech stylings to create the air of a demonic castle that is run using modern technology. There are demon heads 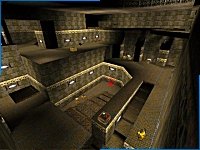 and skulls dripping blood sitting next to modern light fittings that flicker and crackle. The texturing of the level is very uniform with no areas that look out of place, but also, no areas that take your breath away. A blood red sky and a pool of blood combine with the an ever present skull trim to add to the feel of a demonic place that has recently been abandoned in order for you to vent your blood lust. The one texture that I didn’t like was the banner for the author’s site. It made the level look amateurish, if you want to advertise your site/name then you should put a proper banner up rather than just scrawling it across one of the walls.

Lighting was fairly well done with some nicely defined shadows, the only problem was that there was one too many broken lights in my opinion. The level is fairly quiet with the occasional crackle from a broken light or the howl of the wind in exposed places. Some dripping would have been nice in one of the lower corridors but at least the sound wasn’t over done or left completely silent.

Daz recommends 2 - 8 players, personally I feel that 2 or 3 players is too few for this level, 4 – 8 players works well, with 5 or 6 players providing the best balance between being able to find an opponent and being able to seek cover. Overall a slightly above average level that would makes a good warm up map at a LAN party.