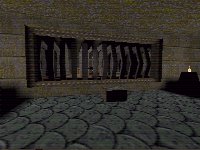 Tiny is how I'd describe this map. Very simply put it is a central room with lava in with a bridge going across it. A corridor surrounds this room. On either side is a switch which, very nicely I thought, lowers the bridge. Theres a couple of nailguns and a super shotgun with suitable in this surrounding area.

The problem with this map is this. The RL and rockets are on the bridge. People are very reluctant to walk on it because som 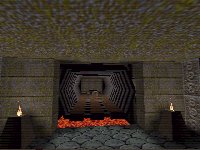 eone will just stamp on one of those switches and drop you to your death in the lava below.

1-on-1 quickly became a very boring, repetitive type of game. You'd be either running round after your opponent, or they'd be after you. The bots were mindly nummingly stupid here and would blindly dive in the lava to try to grab the RL. A 4 player FFA didn't make much difference. The game was a little faster, but it also meant there were more people to hit thoses brigde lowering switches. Thing is though because of its placing, flat on the floor, you could accidently walk over it when going backwards down a corridor.