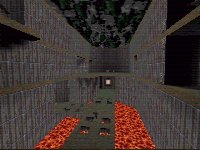 I'd swear I've seen this map before. It just seems very familiar to me. Anyway, it does look similiar to DM4.

Some areas are a little cramped and some areas seem a little too wide. Its wierd. The outside are shown in the left screenshot seemed to chug abit with a few players in and also I and the bots had a tendency to try to swim in the lava. The layout is a little messy in some spots.

Its rather a fun map to play but I don't think theres enough ammo in here to sustain a high amount of players. Enough players that is to get a game underway.