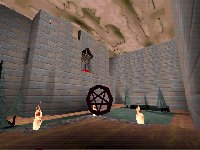 Before I start this review I have some comments. The map that was originally submitted to be reviewed was Shim3. The author just gave a website link and not a direct link, so I had to fart about to get hold of it. I tried to email the author to say please next time give a direct link. My email got bounced, so obivously the return email address is crap.

I'd started to review Shim3 when an email for Shim4 arrived. Shim3 had disappeared. Deleted from the website. I eventually found a reason for this in the text file. Shim4 is a re-jigged version of Shim3 with some bits removed.

Now why've I gone to the trouble of saying this. Well its simple. I don't like being pissed about, it would have been nice to have been given a reason as to what was going on. I did try to email the author twice, but both times I the email was bounced.

So after eventually getting my hands on this map, is it any good? To honest, no its not. Theres some nice ideas in there but theres also some equally bad ideas. The area shown in the left hand shot is actually from Shim3, in Shim4 theres a ramp against the right hand wall. Also the pentagram of protection isn't there. What is there though is an invisible teleporter! Also the wooden platform which can be seen around the bottom of the castle building is a lift. Not a little part of it. The entire section is lift.

What has been removed is a lot of rooms with water in and a car park which looked completely out of place. Thing is the style of map still isn't consistent. Theres a pool/snooker table in a bar area which then connects to corridor which has a roof which can be activated to crush players. Theres also a load of brown rock caves, which have really uneven floors which means lots of jumping to spot other players.

The lighting is so-so. Some areas have those horrible pulsating lights which go from pitch black to fullbright.

It plays ok. You need alot bots in there though. About 8 to 10 seem to do the trick. Its not that its a big map though, the reason for this is that they can't get round the map properly anyway so putting that many in keeps the rooms with some bots in.

This map is an improvement over Shim3 in that its better connected together, but its still not an enjoyable map to play.