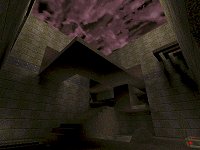 I have to admit DM2 was never one of my favourite maps, as it had far, far too many traps to fall or get crunched in. Fortunately, this map only has one, which the Omis love to bits.

The design is very plain - square chambers coated with yards of id metal walls, rust-coloured floors and lava pits (some open), along with a few decorative demon heads, windows and runes - although the arrow-head ones don't point to anything, plea 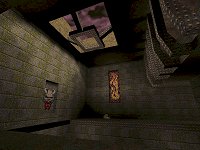 se note. Upper levels are adorned with metal support ribs. Most of the connection is done along one side of the map.

Gameplay is actually quite hairy. Power tools are parked in tight corners near the action stations (as well as in the middle of corridors), and armour and health seem scarce - and usually placed on the far side of a firefight! There is a megahealth you have to rocket-jump to above a narrow stairway and a red armour on a platform you also must RJ to over one of the main kill zones (though I never seemed to make it.)

So there it is: dull to look at, bot unfriendly, and gunplay fast and furious.

Acctually I thought this map was pretty cool, played quite well.

And NO you newbie, you dont have to RJ to reach the RA, just simply slopejump from the shaft.

No map should be judged on bot play, it isn't fair to either parts.

I was thinking the same thing Asriel. I think skleros is a little confused there.

I didn't mean it as an insult, I mean I managed to figure out that jump after playing the map for 5 mins, and he has done a review of it and should have played it to some degree?

Although I agree that the stupid trap, somewhat destroys the map.

hey how long til the maps are able to be downloaded : ?? dying for a game on this map

i love the idea of it that is xD