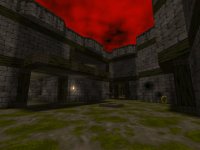 An interresting little map this one. The textures are medievil with large beams of wood supporting the stone structures which make up the map. The bottom level is quite expansive and links up the rest of the map very well while the second level serves as a place to store items and weapons and get a height advantage on your opponents.

Gameplay is fun but can get quite frustrating with all the beams of wood to get caught on, the bottom level is where all the action is, especially around the rocket launcher area and the lightning gun a 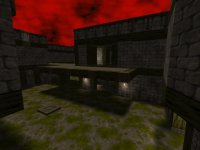 rea. Most of the other areas dont see much carnage but they do hold nice items such as a megahealth and armour. One item I did like the placement of a lot is the red armour, overlooking a large area where you an either rocket jump up to get it or use the stairs which take longer but you dont loose any health...

there are also some teleporters which are quite handy for getting around, but be careful as one of them exits the map (tho it is well sign posted). Not sure why the level exit is there but its out of the way and shouldn't cause a problem.

overall this is a solid map that plays pretty well but improvements can be made all round, a promising map from an author which I would like to see more from...

This map depends far too much on what look like tyrlite or arghlite effects (sunlight, minlight.) More dramatic lighting would have helped it immensely.

I got an E-mail from Blackhawk with his proper E-mail address in it (yes the mailto:[email protected]?subject=Arrgggh don't email me!? was a little strange :). I have ammended the review with it.

It's so Doom2! Not every map has to follow the same masterpiece pattern, you know. Some are very good in their own ways..

..my only gripe is that the same thing only 3 times as large would have been nice. Neat little map..very oldschool :)

Doom2 was exactly the idea. I had been playing the Gothic2 wad for Doom2 when I made this map (and the next one, bh2_rrg). It's not to everyones taste, but Doom's linear layout and great atmoshpere was what I was trying to do. Glad you liked it:)