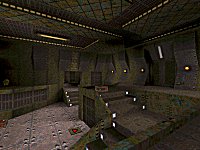 This map is actually four chambers from Kona's SP The Savage Sanguine, done up in a mixture of Rubicon rust and Quake 2 boilerplate. This makes the place look a bit darker than in Sanguine (more ravaged?) and actually works quite well. I had to ferret around to find a texture misalignment, not that most folks'd notice it.

Unfortunately the large open nature of the chambers and their connectivity issues (these rooms are very close together, so connectors are short to nonexistent) takes its toll on r_speeds and so the game slows down a bit. Which is a pity for reasons I'll explain later.

All weapons are here, including a whopping three RLs, which are all piled in one corner of the piece, which at first seemed to my eyes a little strange. Guns on the top floor spin in place, on the bottom floor they're encased in lockers you have to shoot open - a nice audio clue.

Actually, after playing a bit I began to l 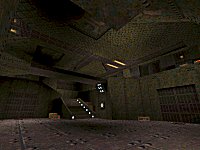 ike the "strategic" nature of the RL placement: Sure, there's an RL up there on the bridge, but what if someone nabs the one in the locker below? Or is swinging past the one in the U-hall beyond? And where've my legs gone?

The chambers are large, but open; eight peeps can be fitted in nicely or you can have a surprisingly good game of 1v1. Above four people and action begins to heat up a treat - there's very little cover, you either stand and fight or die. It's mayhem - great fun!

As I said, it's a good map but the r_speeds spoil it a bit for me.