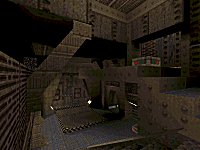 Note: This map is packed as a self-extracting file.

Fortress Behind Forest was, as far as my jaundiced eye could tell from the screenies, going to be a dog. Well, I've been wrong before...

The structure is three four-level(?) atria of a sort of modified id base. The tight layout is absolutely crawling with detail - it's unbelievable how rich the place looks. The only beef I have is that some parts could have been clipped better to avoid bailing.

With the tight quarters and decent weapons load, the game can be and is a fun one. I'd recommend about 2-4 people. Maybe 6 at the outside.

A bit of a high score given that you can't even like, move, in this map. It needs to be at the very least scaled up by a factor of like 2...

And yes, its certainly crawling with detail... an overabundance of detail (admittedly some of it interesting) which results in visual overload. Plenty of messy texturing in there too. My reaction to this map when I saw it a while back was 'it could have been decent but it... isn't'.

A bit of a high score given that you can't even like, move, in this map.

I didn't find moving a problem, although I was only playing with 3 bots.

The other reason I like this map is because it reminds me of some of my favourite shops, where it seems you can't move for all the shelves and stock either. Nice and comfortably cluttered...

Maybe the score was more fair the first time since it seems to have been reviewed twice like several Joe Hunter maps :)

4 over 5 is an unfair score. Unfair to other maps.