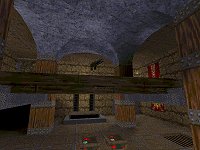 WARNING: This map is a self-extracting executable which may not work on some systems.

This isn't a hallway, it's a medieval shotgun shack. The most powerful weapon in this collection of chambers is the grenade launcher, and there are two of them, both perched up in the air.

The map consists of about three two-storey atria in somewhat varying styles which are connected by one and one-and-a-half storey pods and, of course, hallways. The hallways themselves vary in style, which while keeping visual interest up does make this map feel like a mishmash. The low ceilings don't help either. I constantly felt like I was having to stoop.

Level changes are dealt to with stairs and lots of platforms. This not only means plenty of sound cues, but also has the undesirable effect of making the map look even more slipshod - go up steps then a platform the rest of the way - in one room? Not good. 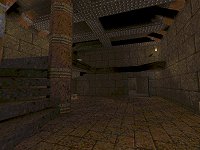 in bulk of the gunplay is done by super shotties and Perforators. In other words, you do a lot of chasing around and about the place and then end up breaking off as your ammo runs out. If the target found the red armour you do this for a longer period of time.

Four players tended to rattle around a bit, six would be ample, and eight could be fitted in if you wanted to actually kill something. This could have been a very good 'un if Joe had used one style throughout, thrown in some more powerful gear and connected the chambers in a more coherent way.